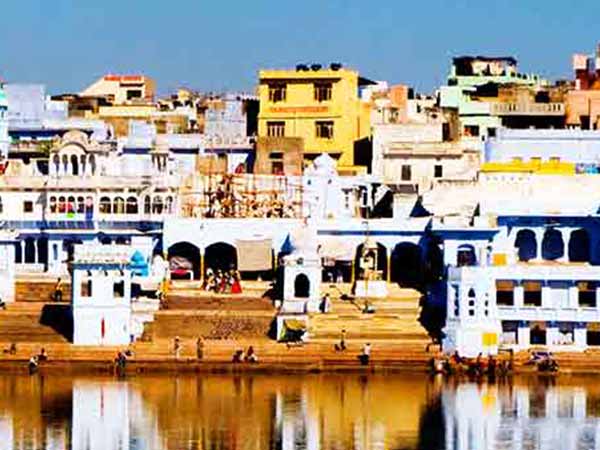 Surrounded by hillocks on three sides

Surrounded by hillocks on three sides 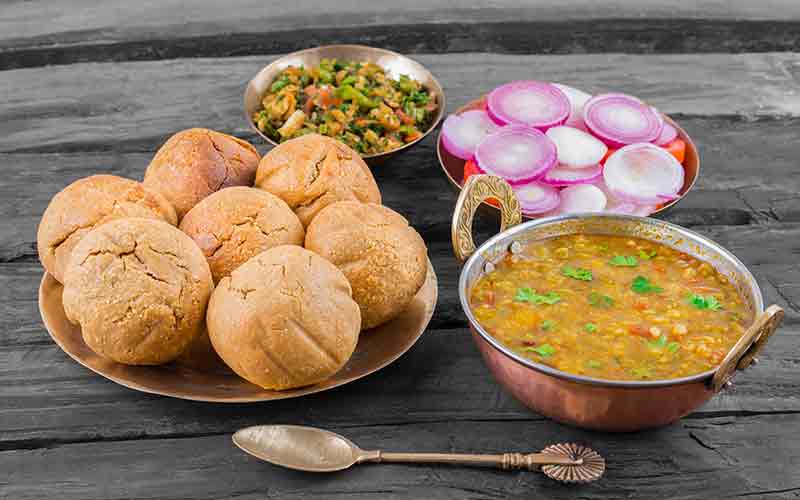 Pushkar is a town in Ajmer district of Rajasthan. It is located at about 10 km from Ajmer in the north west direction. It is about 150 km away from Jaipur. It is also considered to be a pilgrimage site. It is a traditional city with lot of temples and Ghats which provides good reasons for Hindus to consider it to be a pilgrimage place. The Brahma Temple built during the 14th century is the most famous of all.

It is on the shore of Pushkar Lake. One of the Ghats in the city is called the Gobind Ghats in memory of Guru Gobind Sahib by the Sikhs and thus Pushkar is frequented by the Sikhs also. The Pushkar Camel Fair is an annual affair which is one of the most popular fairs across the country. The fair attracts more than 2 lakh people.

The city is located in the western side of Aravalli Mountains. Kishangarh is the nearest airport to the place and the tourists have to disembark at this airport to reach Pushkar by road. The road connectivity is good as the highway is well planned. Ajmer is the nearest major railway station. The USP of the place is that it has 52 Ghats. It is world famous for the Camel Fair. It takes place in the Hindu month of Kartik. It is one of the most important holy regions in India as the Brahma Temple is located here and Lord Brahma is considered to be the creator of the world.

Direct buses operate between Ajmer and Pushkar. It is 30 minutes away from Ajmer and the road connectivity is one of the most widely used routes by the locals in Rajasthan. As per the census of 2011, the population of the area is 21,626. Camel Safari is very indulgence in the area. People like to explore the area in the bike as these are easily available on rent.

Summer season dominates the climatic conditions in the region. It is not as dry as the rest of the State. Rainfall happens in abundance in the region and the winter months are cold too.

The place a rich heritage and culture. The cultural event which is the biggest in the region is Pushkar Camel Fair which is world famous too. Thus it attracts lot of tourists. It takes place for five days in the month of October or November and the people indulge in merry-making during this period. More than 50,000 camels are there in the fair and these are traded. Camels, horses, and cows are beautifully adorned and the sight is awesome.

Holi is celebrated with pomp and laughter throughout the region. Other important festivals are also celebrated with equal fervour. Moreover, the pilgrims can easily consider taking a dip in the Ghats present in the region. Old Pushkar has been rebuilt and shares a very rich culture. The region mostly offers vegetarian food. Jewellery and handicrafts found in the region are very popular. The use of alcohol is forbidden within the boundary of the region. But times have changed and various hotels have obtained the license to serve alcohol. 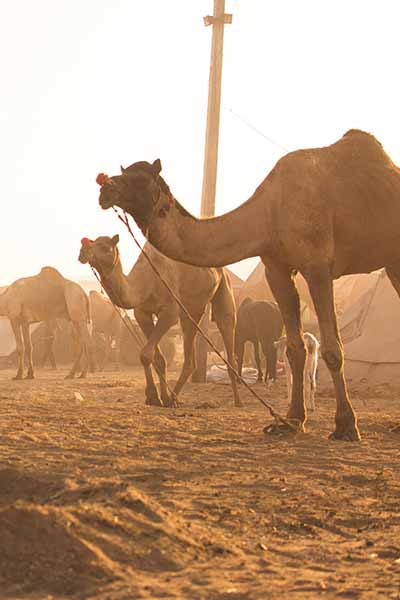 It is one of the oldest structures in the country. It is an ancient site also as archaeologists were able to find Microliths in the area. The mention of the town has found place in epics like Ramayana and Mahabharata. The Muslim texts have revealed the raids and conquests which took place in Pushkar. It was under Muslim control for various centuries. After the decline of Mughal power, the area came under Hindu control again and was under Rathor of Mewar. The temples were rebuilt during this time. finally it came under British rule in the year 1801 and remained under them till independence.

Pushkar Lake is a beautiful spot to visit in the area. It is believed that the Lake was created by Lord Brahma. The Lake is surrounded by 52 other Ghats. People consider it to be scared to take a dip in the holy waters of the Lake.

Pushkar is not a very big area and people can easily plan a day trip from Ajmer or Jaipur. Camel ride in the area can be a fun experience for the tourists. Bikes are also available on rent.

The local restaurants serve tasty vegetarian food and as the place is a pilgrim site, the vegetarian food is the most preferred as well. Street food is also popular here. However, people can indulge in eating diverse cuisine in the eating joints which are quite popular in the region.

Obviously, the most important indulgence is Pushkar Fair. Camel Safari is also one of the most sought after activities in the area. Bikers can also have great fun in the mountainous region. The tourists love to explore the area.

One of the oldest cities of Rajasthan

Travelling to Pushkar? Plan with us!