Rajasthan is undoubtedly one of the most visited places in India and is thronged by tourists from all over the world, almost 365 days a year. This is one state that shows the colourful and the exotic best of India. Rajasthan is home to majestic palaces, deserts, snake charmers, and history. Be it the evocative ruins or the Havelis that are restored to their splendor, Rajasthan finds a place on the wish list of almost everyone.

If you haven’t yet visited the cities of Rajasthan, it is the best time you plan a holiday to a place that boosts of delectable food, splendor, and amazing eye-catching attractions. Let us in this post learn about the places to visit in Rajasthan in 3 days. If you have enough time on your schedule, make sure to spend a few days at least in each of the towns to explore the distinct and individual culture and tradition of each of them.

Jaipur is not only the capital of the state but is one of the largest cities of Rajasthan that was founded in the year 1727 by the ruler of Amber, Sawai Jaisingh II. The city which is also popular as the “Pink City of India” is popular for its artistic architecture and the saffron color of the buildings. The streets are very well planned and have a lot to offer to its tourists. Be it the forts or monuments, gardens or museums; the city houses it all. If you love handicrafts, there is no better place to explore as the city has more than 20 unique handicraft specializations.

Some places you can visit in Jaipur are the City Palace, the Amer Fort, Jal Mahal, Hawa Mahal, Jantar Mantar, Birla Temple, Galtaji, Pink City Bazaars, and the Govind Dev Ji Temple. Tourists can visit this place almost any time of the year, but it is advised to stay away from travel during summers as the temperatures are pretty high.

Udaipur or the “Venice of the East” is also popular as the “City of Lakes.” The city which was once the capital of Mewar is known for its splendid Rajputana architecture. Today some stunning palaces have been transformed into hotels, known for their finesse and also attract a good number of tourists to the place.

The city is located at the foothills of the beautiful Aravali mountains, and the picturesque location makes it a must-visit destination when you are in Rajasthan. Tourists not only get to visit market places, forts, and ancient palaces but can also pay a visit to various historical temples here. The people are very warm and welcoming and the city well-planned.

Some attractions you can visit when you are in the City of Lakes are Lake Pichola, The Lake Palace, The Lake Garden Palace, The Royal Vintage Car Museum, Shilpgram, Bagore Ki Haveli and the Moti Margi to name a few. Make sure to visit Lake Pichola as it is known to be one of the most ancient lakes in Udaipur and is named after the village Picholi. As per historians, the human-made lake was created in 1362 AD for irrigation and to provide drinking water to the people of the village. This is indeed one of the best places to visit in Rajasthan in 3 days.

Jodhpur is the second largest city in Rajasthan and was founded by Rao Jodha Singh in the year 1459. The second populated city in the state was once the capital of Marwar. Also known as the “Sun City,” Jodhpur enjoys vibrant sunny weather all year and is one of the most important cities as it lies at a distance of only 250 km from the border of Indo-Pak.

Jodhpur, the blue city, is a royal city and is filled with several forts, monuments, and temples that enchant the travelers who visit the city from various parts of the world. The houses located near the Mehrangarh Fort are painted in blue and hence the name “Blue city.” Some of the major attractions of the city are the Bada Bagh, Mehrangarh Fort, the Mandore Gardens, the Kalyana Lake, the Umaid Bhawan Palace, the Sardar Samand Lake, and the Masuria Hills. 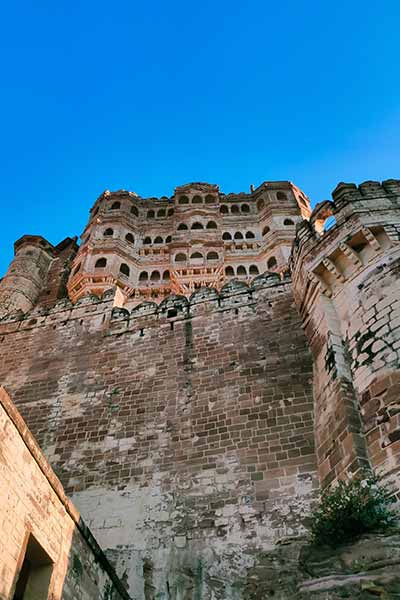 Jaisalmer is aptly named as the “Golden City” as the golden hues cover the magnificent city during the day time. The city that lies in the heart of the Thar Desert was founded in the year 1156 AD by the then Rajput ruler, Maharawal Jaisal Singh. The golden sands of the Thar Desert are nothing less than magical, and the city’s architecture that uses golden colored sandstone adds to its beauty. The city is a world famous tourist spot, as a number of crafts and arts, and architecture is just unique to this region. The hotels here are known for their hospitality and provide a home away from home for all the tourists.

The unique attraction of Jaisalmer is the Jaisalkot fort, which is one of the largest forts in the world. Tourists visiting the city for the first time would need at least 2-3 days to explore the city to its fullest. The eateries here do need a special mention as they serve the best of Indian and multi-cuisine delicacies.

The best time to visit Jaisalmer is during November or December as the weather is pleasant. Some places you can visit here are Jaisalmer Fort, Patwon-Ki-Haveli, the Sam Sand Dunes, the Thar Heritage Museum, Gaidsar Lake, Salim Singh ki Haveli, and the Nathmal Ki Haveli.

The holy city of Pushkar lies in the Ajmer district of the state and is famous for its Annual Camel Fair. The colorful city depicts the true culture and tradition of Rajasthan and is also home to a very rare Brahma Temple. Also popular as one of the most ancient cities of India, the Pushkar Lake is a Hindu pilgrimage site which has several ghats where the evening Aarti is held every day.

If you wish to capture the emotions of rural India, there is no better place to visit than Pushkar. The best time to visit the city is during October and November as the famous Camel Fair takes place during these months. Tourists can visit the Pushkar Lake and seek blessings at the Meerabai and the Brahma temple.

Built in the year 1763 by Maharaja Sawai Madho Singh, Sawai Madhopur is a city you must visit when you are in Rajasthan. The city only has two major attractions, the Ranthambore Fort and the Ranthambore national park, both of which have their uniqueness.

Other than the Ranthambore national park and the fort, the other attractions you can visit here are the Chamatkar Temple, the Chauth Mata temple and the Khandar Fort.

The city of Ajmer is surrounded by the beautiful Aravalli Mountains and is located near to Pushkar. A city known for its history and culture, Ajmer is the home to the holy shrine of Khwaja Moinuddin Chishti, which is a unique pilgrimage site for both Hindu’s and Muslims. The city has many historic sites and witness tourists from all over the world. Ajmer was also selected by HRIDAY as a heritage site in the year 2015. Some attractions the city offers to its tourists apart from the dargah are the Taragarh Fort, Anasagar Lake, Abkari Fort and Museum and the Adhai Din ka Jhonpra.

The only hill-station in Rajasthan, Mount Abu is a perfect retreat for tourists from all over the world. Most of the tourists who visit this place are from Rajasthan and Gujarat who look for a respite from the heat of the scorching sun. The hill-station also has a historical significance and has been mentioned in the epic of Mahabharata as the Arbuda Mountain. The hill-station is known for its green surroundings, wellness centers, and some picnic spots. Some of the best attractions tourists get to visit here are the Dilwara Jain temples, the Guru Shikar, Sunset point, Wildlife Sanctuary, Nakki Lake and the Toad Rock.

Rajasthan is more than a land of forts and rajas. The state boosts of rich cultural history and each of its cities provide a different and unique flavor to its visitors. With every place, you visit you not only unfold some mysteries but also take home memories that last a lifetime. The cities and tourist attractions in Rajasthan offer a spiritual experience like no other.

So, make a list of the places to visit in Rajasthan in 3 days, make your bookings and enjoy a captivating holiday!

Comments on Places to visit in Rajasthan in 3 days