Taj Mahal is one of the Seven Wonders of the World. The monument is also regarded as an eternal symbol of love. The Taj is a mind-blowing and intricate mausoleum built to honor the late Mumtaz Mahal. The Taj was built by Emperor Shah Jahan in memoir of his dearest wife Mumtaz Begum.

What was Shah Jahan’s mighty perception behind building the Taj?

The Shah Jahan considered the Taj not just as a monument symbolizing love but much higher than that. He firmly believed that even if guilty begged pardon in front of the mausoleum, the person gets freed from his/her sins. This mansion can wipe out sorrow as the moon and rain shed tears from their eyes.

The story of artisan’s hands beheaded is a myth

There was one jealous artisan who wanted to sabotage the image or glory of the 16th Century Mughal Emperor- Shah Jahan. He rumored the story that Shah Jahan intended beheading the arms of artisans who had helped him in building the mausoleum. The reason or explanation given to this theory was that the Emperor didn’t want another majestic master-piece to out beat the Taj. This theory is nothing but the myth.

The team of artisans were headed by the chief architect named Ustad Ahmed Lahauri. It was the same team that had built the Red Fort much later. It took 22 years to build the Taj Mahal to utmost perfection. 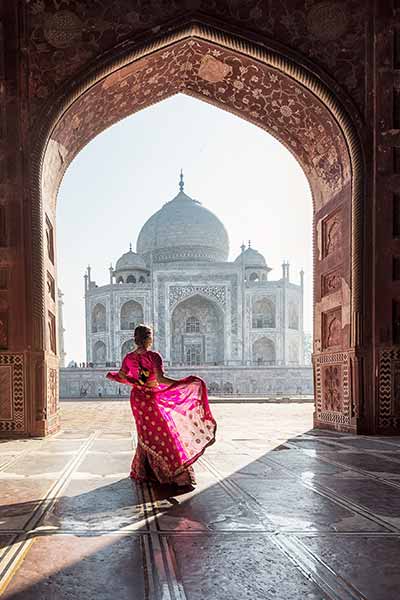 Taj represents various shades to depict the emotions of Mumtaz

Not many of you are aware of this particular fact. This was that the monument symbolizes various shades. The tints take shade during various times of the day. It is pinkish in the morning, white in the evening and golden during the night. The glorious kaleidoscope of colors represent the changing moods of Mumtaz during the course of the day.

There is a special reason behind why the team of artisans built the minarets of the Taj pointing outwards. This was mainly done to protect the monument from mighty earthquakes, thunder storms or other calamities of nature. These are the four minarets that are held tilting outwards. This particular feature ensures the safety of the tomb.

Precious gems used for decorating the inlay of the Taj

There were 28 varieties of rare precious and semi-precious stones that were used for the inlay work in Taj Mahal.  These were gem stones sourced from India, Sri Lanka, Tibet and China. This particular inlay dais was tampered several times by the British. They wanted to take the stones away. It was only during the late 19th Century that the restoration work was undertaken.

How expensive is the Taj Mahal?

During the 16th Century AD, Shah Jahan spent a whopping 32 million rupees to have the mausoleum built. Today, it can cost a sum of 1,062,834,098 USD to have such an intricately decorated mansion palace built.

Black Taj Mahal was in the pipeline

The offing connected with the black monument was also one of the most interesting facts about Taj Mahal. The emperor wanted to build a black Taj Mahal next to Mumtaz. But as the building work was going on, he was captured by his own son named Aurangzeb. Hence the completion of his own memorial tomb could not be taken forward.

If you had noticed something unique about Taj Mahal’s foundation, then this is the one. Its foundation is made from timber. Timber isn’t the kind of material that is long lasting. Then you may wonder, how is it that the monument has withstood the lapse of time? The 5000 year old monument is still alive because of the presence of the Yamuna River. The wood is kept moist and strong because of the river.

Had to conceal the building due to security issues

This was such a majestic man-made creation that was beyond enormity. The building had to be protected by anti-social elements or even enemy nations who were waging war against us. To protect the monument from the bombing attacks of World War 2, a stock of bamboo pile had to be placed. This was above the minaret ceiling. There was this Indo-Pak war waged in the year 1971. To protect it, a green cloth was placed upon it by the archeological department.

Uniform water-pressure at the fountains

A temple was also built

There was a petition made by the people of Bihar to build a temple too. A temple has also been built by a staunch follower named Natwarlal. This was near the premises of Taj Mahal. Till date, the Hindu temple and the Taj have been standing together on a harmonious coexistence.

These are the top 11 interesting Facts about the Taj Mahal. The fact that it is five feet taller than Qutub Minar is also something of a renowned one. You should surely visit the Taj Mahal at least once in your lifetime.

Viewing the Taj during the moon lit night can be a resplendent experience indeed. Taj Mahal is situated in Agra across the banks of River Yamuna. You have buses or connecting flights for foreign visitors to visit the same. Partners should love their spouses until death does them apart. This way, you can retain the fresh memories of togetherness until lifetime.

Children can also visit the Taj Mahal and view its astounding beauty. The reflection of the Taj Mahal across the River Yamuna is an experience that cannot be described in words. You can also shop for souvenirs or artifacts at shops bustling the vicinity. So, pack your bags right away and visit Taj Mahal. This is the pride of India without the least element of doubt.